After spending the first three nights in free road side places we reached Cape Keraudren, about 160 kms past Port Hedland where we spent the next five nights.

Cape Keraudren is in a nature reserve so camping is basic and cheap. It cost us $10 to get into the reserve and another $9 each night to camp there. There is no power, and the only water is bore water which we could pick up from the ranger station each day. There are drop toilets, but no showers. What it lacks in facilities though is made up for in nature’s rewards. I woke up each morning in time to watch the sky turning deep red, orange and yellow over the ocean before the sun finally appeared as a fiery ball on the horizon. It was such a peaceful way to start the day.

The tides are huge, and while we were there high tide was around mid-day. By around 4pm the tide had receded a few hundred metres leaving behind hundreds of rock pools on the sea bed. Walking out on the damp sea bed is amazing, watching octopus, crabs and a multitude of other sea life left behind by the receding water. It’s mind boggling to think we were walking around on dry land were only a few hours before the water there was most likely about 6 metres deep.

One of the campers we met there travels full time like us. He said people often ask him what he does all day. His answer is that he does nothing all day, but it takes him all day to do it. That about sums up what we do as well.

A typical day at Cape Keraudren went like this.

7.30am – get out of bed, breakfast, coffee, a bit of tidying of ourselves, washing, and the van, another suduko or two, by which time it’s around 10.30am and time to get the fishing gear organised.

11am – wander down the beach as the tide comes in to throw in a line, or if we’re not fishing, go for a walk or a swim. We fished on two of the days there, and Paul pulled in two good sized thread fin Salmon on the first day, and on the second day we each pulled in one only.

1pm – return to camp for lunch and to clean up our catch and ourselves by which time , if we’re lucky we’ll have time for either a bit of a read or a game or two of cards before it’s time for happy hour.

Happy hour is often anywhere between 1 and 3 hours and it’s where campers meet up and over an afternoon drink or two, share stories of where to go and what to see. It’s an important part of life on the road not only for information sharing, but also for the commeradie. After happy hour it’s time for dinner and shortly afterwards, bed. Doing nothing all day is certainly knackering so we’re usually tucked up by around 8.30pm, but will usually watch either a bit of TV or a DVD in bed, and if we’re lucky we’ll keep our eyes open long enough to keep track of whatever it is we’re watching.

So, as you can see in a typical day we don’t do much, but it manages to keep us occupied for the whole day. 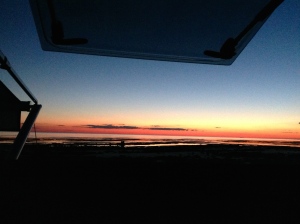