Prague – yes, we made it. We’ve arrived home yesterday after having spent five nights away with Paul’s cousin Margaret and her husband Geoff. Two nights were spent at the airport hotel at Gatwick, and the remainder of the time exploring beautiful, old Prague.

Prague absolutely lives up to it’s reputation. We arrived around mid-day, and had three nights, and three and a half days there. 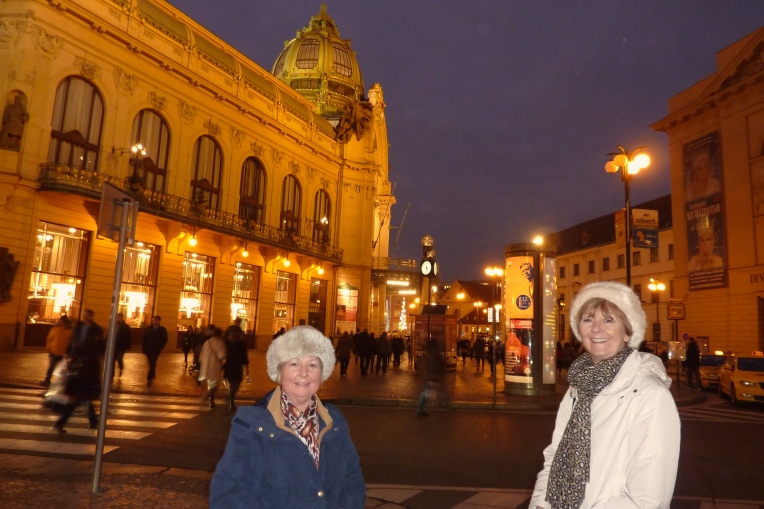 About 4.30 in the afternoon – already dark, and freezing. First day there and I bought a much needed fur trimmed hat.

Firstly, for anyone who plans on going to Prague and happens to be reading this I’m going to start with the ‘could have, should have, would have’. The most important thing I’d recommend is to make sure your accommodation is district 1. There is an abundance of choices to fit most budgets. We booked through a local travel agency and having done some homework, asked for accommodation close to Old Town Square. Old Town Square is virtually in the central point of all there is to see in Prague. We were offered a couple of options, both of which were in district 2. They looked relatively close on the map. Ha ha – if you haven’t guessed already, the map was very deceiving. We were at least a  half hours fast paced walk from Old Town Square. As I’m not the fastest of walkers, it was closer to an hours walk for me.

Prague is definitely a ‘walk around’ city, and even if we had wanted to use taxis, we never saw any available for hire. With our accommodation so far from the centre it meant it wasn’t viable to go back for a mid afternoon rest and freshen up.  We were leaving our hotel around 9.30am and pavement bashing continuously for 12 – 13 hours. Had we been near Old Town Square all of the sites we visited were no more than 30 – 40 minute walk away. We could have given far more time to actually seeing what there was to see rather than spending time and energy getting to the starting point. And we could have had that all important afternoon ‘time out’ back at our digs.

And now onto Prague and it’s Christmas markets. What a joy. The Christmas markets are set up everywhere, but nowhere better than in Old Town Square. Whilst I’ll post a photo there is no way a photo can do any justice to the experience of actually being there. Firstly the smells….. Legs of hams being rotisseried over wood fires, the heavenly, sweet aroma of their special cinnamon scrolls, sausages (real sausages, more like a salami than what we know as a sausage) also cooked over wood fire pits, and  spicy hot wine and cider everywhere. Yes, we had a few. Then there’s the Christmas lights, and the huge Christmas tree. The Christmas tree is the biggest I’ve ever seen and the lights are synchronised with very powerful orchestral music. Absolutely amazing. And all this is set up with the back drop of glorious Gothic and Baroque architecture that Prague’s so famous for. It was all very magical and almost surreal.

What a tree. What a church in the background. What a place.

Cinnamon rolls being cooked over hot coals – taste as delicious as they smell.

On the second day we joined a tour which was mostly walking, but included an hour boat trip, about an hour for lunch, and a short tram ride up to the castle district. The tour provided a great snap shot of the main tourist attractions in Prague.

After day two we were at a bit of a loss, and spent the rest of the time pretty much aimlessly pavement bashing over already well walked territory. We planned to explore the Lessor area more thoroughly but somehow lost our bearings and never quite got there. We forgot we had a map, and had we remembered and taken a look, we were only a street or two away from where we were trying to get to. We didn’t look at the map until after we had returned to Old Town. Grrrr!!!!

So – if we could do it all again, what could we do differently. Of course the main thing is to stay close to Old Town Square, and for preference somewhere between the square and Charles Bridge. The first afternoon I would have spent exactly as we did spend it, just meandering around Old Town Square and Winceslas Square and generally getting our bearings. Then, rather than doing a walking tour that encompasses everything in a snap shot six hour tour, I’d spend the second day doing a tour of just the Castle area and perhaps the Lessor town area only. The castle area isn’t just a castle, it’s almost a village, and the same with the Lessor town area. Both areas are across the river from Old Town with a few available access bridges. The most famous is the Charles Bridge – stunning. On our walking tour we spent no more than two hours perusing these two areas, a full day is needed. 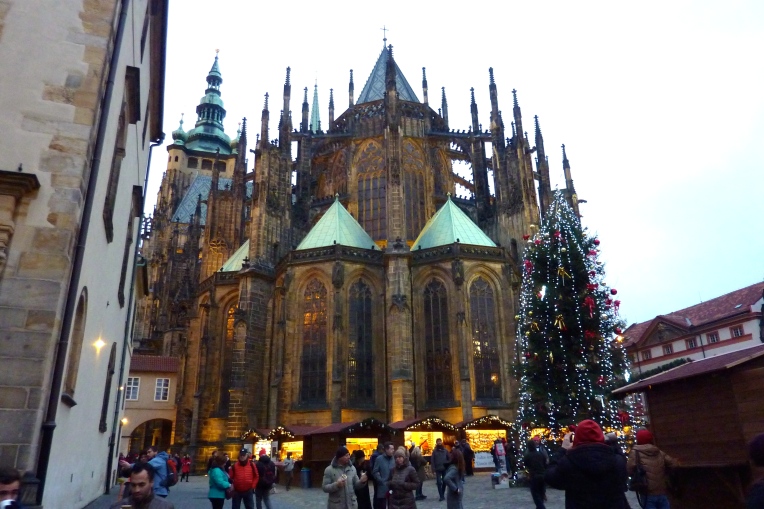 Neo gothic addition to the gothic church in the Castle area. The first part of this church was built in the 13th century. This addition was completed in the early 1900s. More than 500 years to completion.

Then there’s the Jewish quarter, which we hardly saw at all and I’m sure a half day wouldn’t go astray perusing the buildings and museums there. We only briefly passed it on our tour.

Most days there seems to be a number of classical performances in one of several spectacular venues. We didn’t do any as we only really became aware of them when it was too late. And we didn’t do the Kutna Hora area, which involves a trip out of the city into the surrounding countryside, and includes a visit to the famous bone church. There is a 6 hour bus tour for Kutna Hora, which I mentioned a few times to my fellow travellers, but no-one seemed to be interested, so I put that idea aside. However, late on our last day Paul said that we should have gone there…  again, Grrrrrr!!

So, thats what we did as apposed to what we could have done, should have done, and in hindsight would have done. So hopefully by writing this, someone reading it has a chance to learn from it and won’t end up wasting two days as we did. Staying in district one  would have allowed us to make the most of our time there. I think we could have seen most of what there is to see and done justice to it all in the time we had.

So, I know this sounds like I’m grumbling a bit. I had a fabulous time. I just didn’t make the most of it and it’s unlikely I’ll get a repeat chance.

Follow Life of Riley – on whatever on WordPress.com
Join 241 other followers