With less than a week to go now until we resume our ‘life of Riley on wheels’, we thought we’d take a final visit to our favourite little, local town – Cowaramup, or Cowtown as it’s known colloquially.

I’ve mentioned the town briefly before, but thought I’d provide a few more facts, and a few more photos.

The town was gazetted in 1925, and origianally supported the local timber and dairy industries.

Contrary to popular belief, the name of the town is derived from an Aboriginal word, Cowara, meaning purple-crowned lorikeet.

The town centre consists of a local store providing basic produce, a post office, a bakery, a sweet shop, a couple of cafes, a real estate office, and a few specialty stores selling everything from gourmet produce and candles, to all manner of arts and crafts. There’s no supermarkets, and definitely no MacDonalds anywhere in sight (or even out of sight on the back streets) – joy!!! Oh, but if you fancy a good pie – one of the local little cafe sells some beauties.

In 2012, to enhance the town’s growing ‘cow’ identity, 42 fibreglass sculptures of friesian cows and calves were commissioned. As the town is very small town, there’s  literally cows almost every few metres. They adorn the shopfronts, parks, footpaths, and are on almost every street corner. 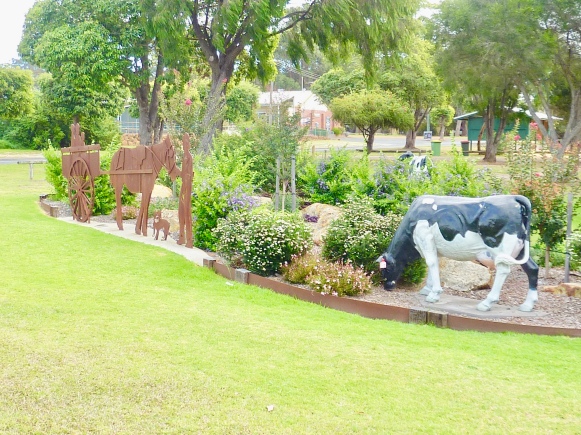 One of my favourites is the Cowtown’s cheeky answer to Laurence Winery’s 23-carat gold plated, ‘free as a bird’, aka – ‘Chick on a stick’ (more on that later). Centred in the local park is Cowaramup’s, ‘Rump on a stump’ or, ‘Roast on a post’. Cowtown – or should it be quaint-town, whatever it’s called, if you’re planning a visit to WA’s southwest don’t drive though without stopping for at least a walk around.

And now a bit about the ‘Free as a Bird’ sculpture at Laurence Winery. Early in the 21st century concerns were raised when the sculpture took up residence in the dam fronting Caves Road. The Busselton council took umbrage (some say at the instigation of the neighbouring wineries), and sought to have the sculpture removed. They said the 17.5 metre high erection contravened local and state planning policies, and impacted negatively on the area’s natural and rural outlook.

I’m pleased to say that in October 2007 the State Administrative Tribunal ruled against the shire by granting retrospective planning approval. The ‘chick on a stick’ with all it’s controversy, and the Cowaramup’s humorous take-off, the ‘rump on a stump’ are both here to stay (for a long, long time I hope).