What a busy time we’ve been having lately. Sunday 27th May, my birthday, commenced a busy week of wining and dining, and wow – did we commence it in style.

Paul took me to Vasse Felix winery and restaurant for lunch. 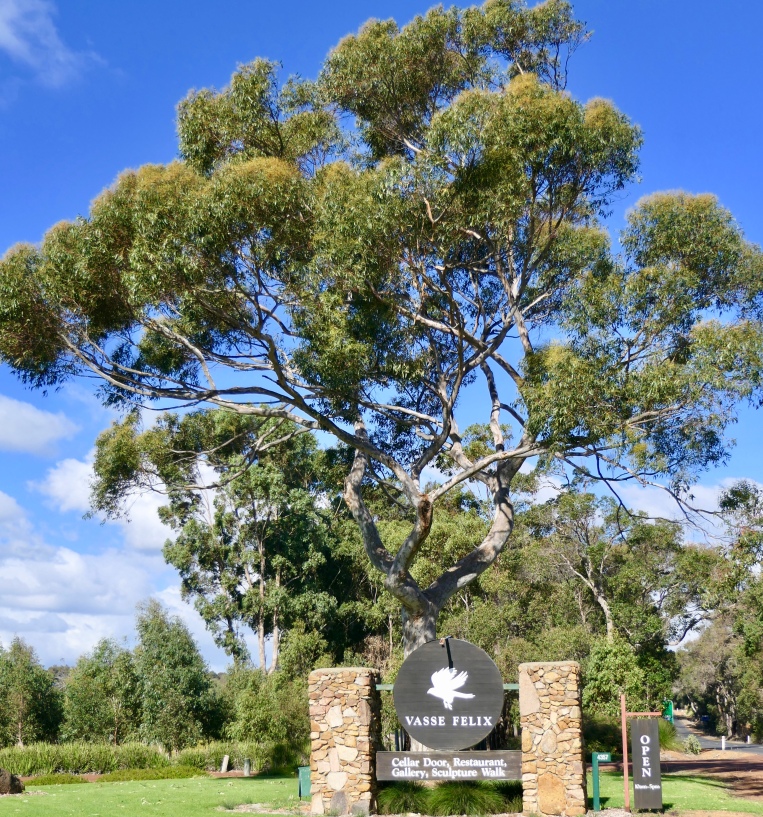 We arrived just on time so didn’t have time to take advantage of the wine tasting. Walking upstairs to the restaurant the first thing you see in the huge, and tastefully rustic dining room, is the suspended fire – I want one!

We were shown to our table, and our waitress for the day introduced herself, and explained the menu. It’s a small menu, exactly how I like a menu to be. When it’s small there’s a much better chance of everything being fresh. The menu changes daily according to seasonal produce. With things listed like, Straciatella, Betel leaves, Bigoli, and Duck Yolk it definitely needed some explanation. I hadn’t heard of most of them, and even if I had, I’d never tried them.

Explanations given, we made our choices. Firstly a glass of bubbles for me, and a half glass of Cab Sav for Paul to have with our starters of sourdough with whipped burnt butter to share, marinated olives for Paul, and Marron, orange, chilli, and rice in a betel leaf for me.

The marron came as a shelled tail with the other ingredients in a betel leaf, served on a small hot rock. I was told that I was to roll the leaf around the marron tail and eat in from my fingers, much like a small taco.

The verdict on the starters: The marron – very different, and yummy. The bread delicious, the burnt butter – so good I’ve tried to replicate at home (the waitress told me how), the olives – ok.

Next came our shared entree of Duck parfait, stout and  chicken skin, served with Lees crisp-breads. The Duck parfait was a sort of whipped pate, very light, and I gather the stout was an ingredient in the parfait. I believe the crispy crumb sprinkled over the dish was the chicken skin. The Lees crisp-breads are made from the left over yeast sediment from the bottom of the chardonnay barrels.

The verdict on the shared entree: Wow, Wow, Wow!!! I have never, ever tasted food so good before. I moaned in ecstasy trying to savour every bite, but at the same time trying not to cram it in quickly so as to get more than my share. I hope I didn’t sound like Sally in that famous scene in, When Harry meets Sally.

Next our mains. Paul chose a fillet steak with Davidson plum, beetroot and hay (not sure what the hay was,  it wasn’t hay that a horse would eat). I chose the Pork, eel, eggplant and miso. We had a side of broccolini, romesco, lardo and almond with it. I had a half glass of the cab sav with mine. I’m happy with only a few sips of any wine, so Paul had to finish it for me (no hardship for sure).

The verdict on the mains: Paul declared his delicious. Mine was tasty but nothing memorable (perhaps that was because I was still in seventh taste heaven after having the parfait).

Then onto deserts: I chose the Mandarin, honeycomb, milk. Paul opted for Cropwell Bishop Shropshire cheese served with blackcurrant gel and lavish crisp breads (plus an additional portion of the Lees crisp-breads that we had with our parfait)

The verdict on the deserts: Paul thoroughly enjoyed his cheese and said the blackcurrant went perfectly with it. The Mandarin desert, which was a sort of a mandarin mouse with a mandarin sponge topping – well if I hadn’t just had the best food I’d ever eaten by way of the Duck parfait, I may well have been declaring the Mandarin desert the best food ever. It was light, and creamy, and absolutely delectable.

We spent nearly three hours over lunch. That length of time for two people can sometimes indicate the service was slow and the courses dragged out. Not so – everything including the timely service of the drinks and each course was absolutely perfect. Needless to say, Vasse Felix has jumped to the top of our list for special dining in the south west. It’s in front of anything else we’ve tried by a county mile.

And now before I close off this post, I’ll give you a bit of photographic tour around the public part of the winery.

And there you have a bit of a summary of Vasse Felix winery, located on the corner of Caves Road and Tom Cullity Drive, Margaret River. A dining pleasure!